The convention of the Ancient Arabic Order of the Nobles of the Mystic Shrine [AAONMS -which is an anagram for A MASON, also known as the Shriners] held in Washington, D.C. during June 5, 6, 7, 1923 was a massive undertaking by the Metropolitan Police Department. By 1923, the Metropolitan Police Department had handled more than a couple of inaugurations as well as other Fraternal group conventions. In fact, the AAONMS had held their 1900 convention in Washington, D.C. The size of the 1923 group threatened to not only overwhelm the resources of the police department but the city as well.

Members of NYPD being Deputized to work the 1923 A.A.O.N.M.S. convention in Washington, D.C. The officer pinned his AAONMS badge beneath his NYPD badge. This is one of the few known pictures showing an officer wearing an AAONMS badge.

To meet the need, the Metropolitan Police Department, filled the 48 vacancies which the department had. 400 Special Police officers were hired at a rate of $5-a-day, which was a large increase over the standard $2-a-day, which the District of Columbia normally hired Special Policemen for these types of events. Additionally, 60 police officers were brought in from Chicago, Boston, Baltimore, New York, Richmond, Norfolk, Atlanta, Mobile, St. Louis, Detroit, Cincinnati, Cleveland, Jersey City, Newark, Wilmington, and Providence. 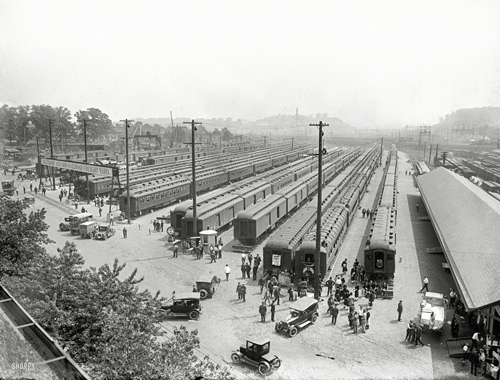 The Eckington yard [is a neighborhood in Northeast Washington, D.C., located south of the Prospect Hill and Glenwood Cemeteries. Eckington is less than one-mile (1.6 km) southeast of Howard University and exactly one mile north of the United States Capitol.] had 700 Pullman cars arranged to house 40,000 people from Pennsylvania as well as Baltimore & Ohio Rail Road. The B&O railway cleared out a warehouse and turned it into a restaurant. The Benning yard area was also transformed from a railyard into housing via Pullman cars.

The AAONMS convention in June 1923 is where I believe we begin to see the various commemorative and special event badges which is part of the Metropolitan Police Department’s rich history. It would have been interesting to read and understand the thinking behind the 1923 badge but alas those records appear to have been lost to us. In examining the 1923 AAONMS badge it is easy to see that those who were responsible for the design followed the basic design of the Special Police badge. The Capitol building was still used as the center focal point but the rest of the badge was designed for the specific event. 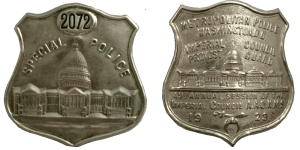 A Special Police force patrolled the Alexandria Pullman railyard and by examining the back of the badge it appears that the regular badges were used and that a plate was attached to the front of the badge with the word POLICE on top of the words ALEXANDRIA VA. 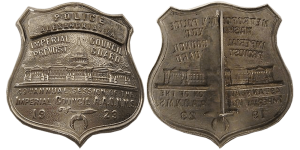 An even rarer version of the badge is the Rockville Maryland Police Department badge. Members of the Montogmery County Shriners approached the city of Rockville about providing Special Traffic Officers to assist with the flow of traffic heading through Rockville on their way to and from Washington, D.C., for the festivities.

A unique aspect to the 1923 AAONMS convention, was the creation of Shriner Courts. During the June convention, if a Shriner member was arrested for a misdemeanor, that individual had the option of requesting to be brought before a Shriner court. The arresting officers would take the individual and turn him over to the Shriner court. There a Shrine judge would hear the case and a member from the Judge Advocate would prosecute the case and another Judge Advocate would defend the member.

I am unsure who produced the 1923 AAONMS convention badges. It could have been Lamb, Steele, and Stencil as well as Bastian Brothers, Blackinton or even another company. 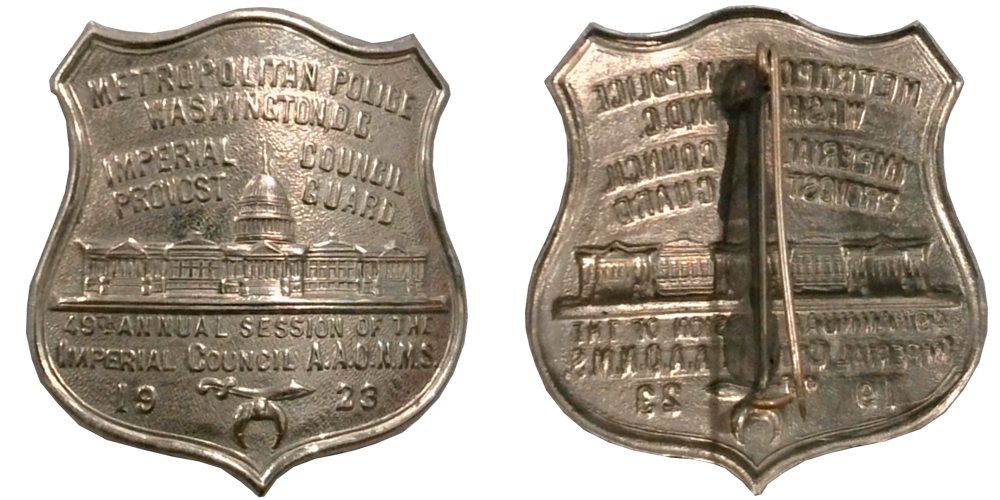 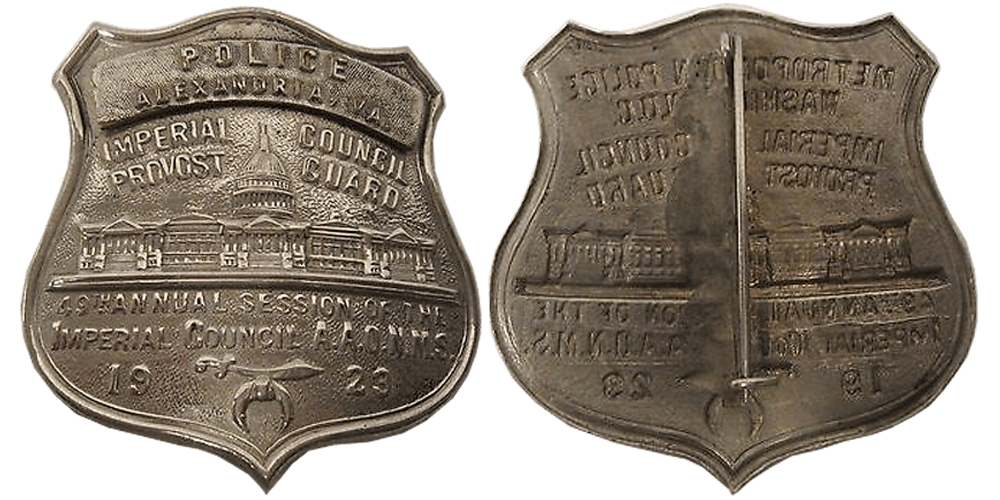 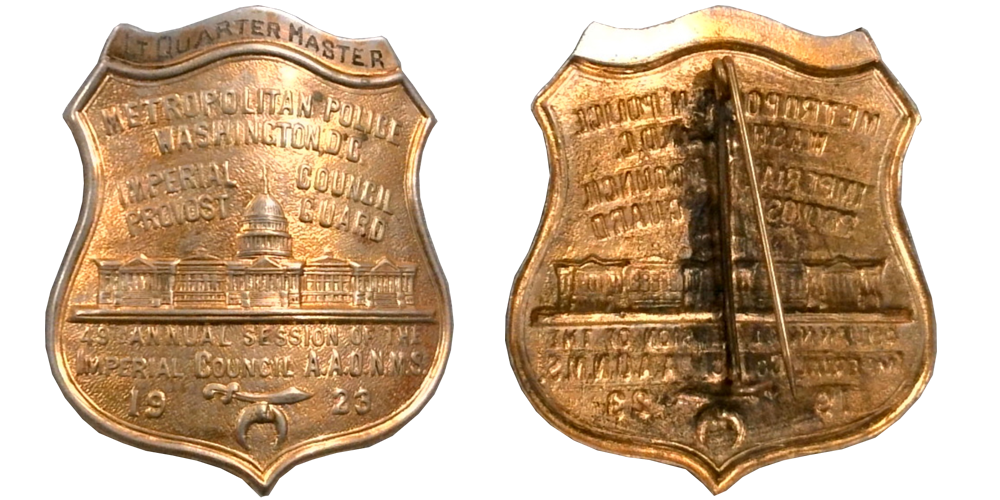 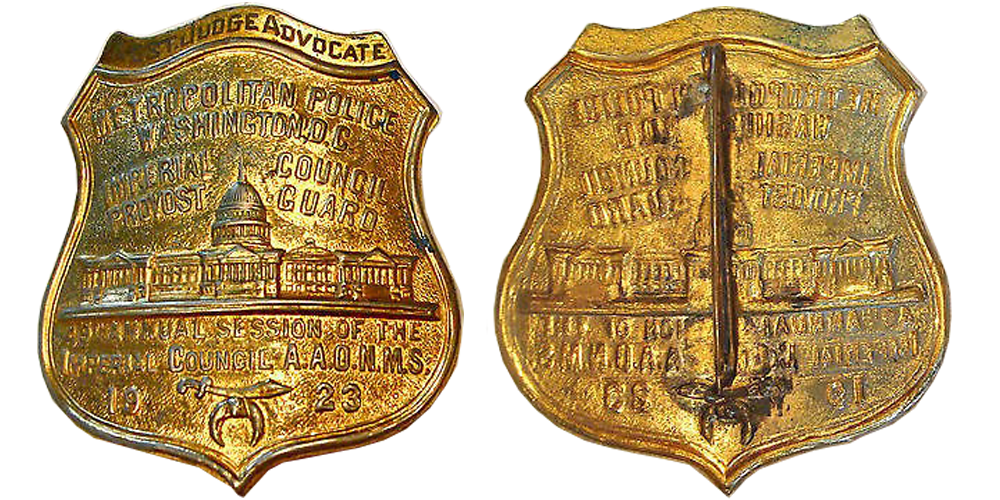