On Friday, June 7, 1935, Major and Superintendent Ernest W. Brown designated Reverend Hiri A. Kester, pastor of Congress Street Methodist Protestant Church and Reverend Thomas B. Dade of St. Patrick’s Catholic Church as Chaplains of the Metropolitan Police Department. The designations were the first in the department’s history.

As Chaplains, the men were expected to serve as spiritual advisers to the force. As such, the Reverend’s were presented with Metropolitan Police Department badges by Inspector L. I. H. Edwards and Inspector Thaddeus R. Bean.

Chaplains Kester and Dade were chosen by Superintendent Brown because of their keen interest in the welfare of the members of the Metropolitan Police Department. The Chaplain Corps is still part of the Metropolitan Police Department, falling under the Department’s Volunteer Corps. Just as in 1935, today the department Chaplains provide counsel to Department members who request their service, visit MPD members who are sick or injured either at home or in the hospital, attend the funerals of active and retired members, participate in Department events and community outreach and present formal lectures as requested.

Qualifications for appointment as a chaplain include:

Be an ordained member of the clergy in good standing for at least six years and be endorsed for chaplaincy by a recognized religious denomination.

Show forth compassion, understanding, and love and easily relate to others.

Be willing and available to respond to any situation where a chaplain’s presence is needed and requested.

Never have been convicted of a criminal offense, nor offenses involving moral turpitude (minor traffic violations are excluded).

Participants must undergo a background check prior to participation.

Both the Congress Street Methodist Church and St. Patrick’s have a long history in Washington, D.C. The earliest Methodist sermon in Georgetown, D. C. was preached in October 1772. John Wesley, an Anglican priest and founder of Methodism, never intended to establish a separate denomination. His efforts were directed toward reform within the Anglican (Episcopal) Church. By 1795 the Methodists of Georgetown had built a church, located on what is now 28th Street between M and Olive, and was then known as the Montgomery Street Meeting House. In 1850 that congregation moved to its current location on Dumbarton Street. On December 2, 1828, a group of 19 men and 15 women withdrew their membership from the Montgomery Street Church and set off together to found their own congregation. That splinter was the Congress Street Methodist Church which was founded 18 months before the Methodist Protestant denomination, and the cornerstone of its building was laid 10 months before the first General Conference of the Methodist Protestant Church was held.

St. Patrick’s Parish was established in 1794, primarily to meet the needs of Irish immigrants at work on the White House and the Capitol building. The initial structure on the present property was a simple frame chapel/residence, one of the first church buildings in the new Federal City. This was six years before the government moved to the Capital in 1800.

The first American to be ordained a priest in the United States, Fr. William Matthews, was named pastor in 1804. This multi-talented clergyman occupied the post for fifty years, during which time he was also President of Georgetown University, Administrator of the Philadelphia Diocese, co-founder of the D.C. Public Library, long-time member of the D.C. Public School Board, as well as founder or promoter of innumerable institutions (e.g. Gonzaga College, Visitation Convent, and St. Vincent’s Orphan Asylum). As the “Catholic Patriarch of Washington,” Father Matthews was on close terms with Washington notables such as Henry Clay and Chief Justice Roger Brooke Taney; Presidents Zachery Taylor and John Quincy Adams attended parish events. Fr. Matthews’ passing in 1854 marked a long era of Catholic involvement in the Federal City’s civic life.

The current head of the Metropolitan Police Department’s Chaplain Corps is Salvatore Criscuolo, affectionately called “Father Sal”. He is best known for the customized motor scooter marked “Chaplain” and “Father Sal” that he has been riding since 1994. On the police radio, his call sign is “H-1” for “Holy One.”

Criscuolo took over as the Catholic chaplain for the Metropolitan Police Department in 1986, when the Reverend Joseph Dooley retired after 24 years of service. Dooley had transformed the largely ceremonial position into the demanding job it is today. He was the first chaplain to wear a pager and respond to emergencies. 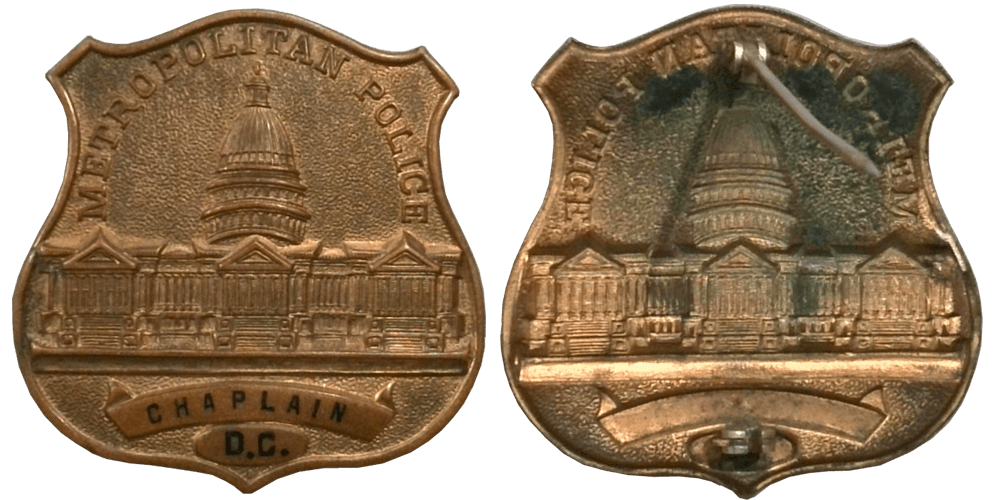